One of my dreams is coming true! Today I will be going to the David Letterman Show! Years ago before I moved to New York City, I loved watching him on television during late night. Back in the days there was a lot of controversy regarding him leaving NBC for CBS. As a pop culture fanatic, I was getting caught up in media hype (kind of like with what went on recently between Conan vs. Jay). I was “drawn” to draw Mr. Letterman’s caricature because he had a great face – especially those teeth!
I love this piece because it shows the depth and texture of his face with great detail. Trust me, this took quite a while to complete.
My technique was to layer the skin tones first starting with pink pencils diagonally in one direction, then yellow tones in the opposite direction.  Slowly the flesh tones begin to surface a bit with these two colours. I then with flesh tone pencils fill in the gaps of the image and the face starts to shine. With a bit of pastel to blend tones the artwork came together. The finishing touches were done with black ink and then highlight the eyes – In my view the eyes are most important because they capture the soul. 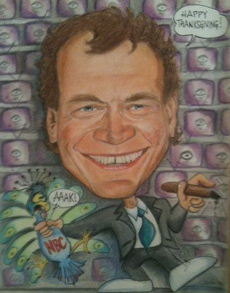 Now whether Dave has a soul is another story! Maybe I’ll bring this to the studio with me today.
What do you think? :0)
Toggle the Widgetbar