A few years back while I was working at Scholastic I was asked to do what seemed to be the impossible – a caricature of Ms. Deborah Forte who is the President of Scholastic Media. She is an Emmy-award winning producer of over 300 productions and including films such as The Indian in the Cupboard, The Golden Compass and Clifford’s Big Movie. Currently Ms. Forte is working on future films such as Mortal Engines, Goosebumps (Columbia Pictures)and will be producing the The 39 Clues movie with Steven Spielberg. She’s extremely talented, super smart and one TOUGH business woman.

I was very nervous and challenged to really do something special – and rose to the occasion. I remember being up all night trying to think of something creative and different and of course to do a caricature that would make her look fabulous! I remember doing her in pencil, pastel and mixed media to give her a nice “soft” look and really enjoyed drawing the Scholastic book characters. I used a shadow box and made the characters pop out by having it look 3-D.

After the department presented the art to her I had no idea what she thought of it. A few days later I was stepping out of the elevator from my long day at work. Ms. Forte saw me, ran up to me and gave me the biggest hug and said, “OMG Cathy! I LOVE IT!”

I’m proud to say it is STILL in her office to this day and has been one of my most challenging but rewarding pieces of work! I always seem to get a surprised response when I tell people I did Ms. Forte’s caricature so I thought it’d be fun to show it to you all. 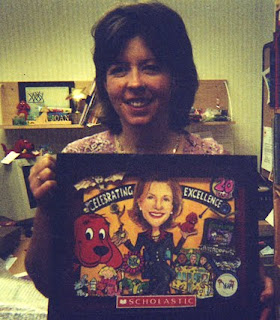